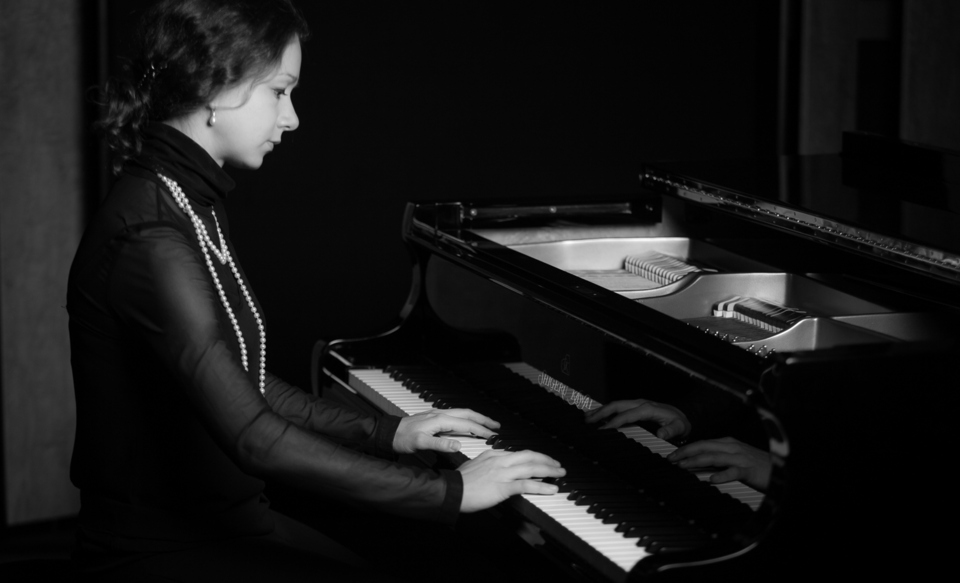 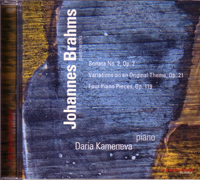 Variations on an Original Theme Op. 21 in D major

Intermezzo in B minor

One is tempted in these times of global music supply to look for shelter because of all those young and even younger pianists. From all regions and countries they are sent out via CD and debut concerts to convince people of their qualities. Surely, many of them are applauded, they are not only known in their home countries, they have won awards, but what the future will bring to them remains - as Leonard Bernstein called it once so fittingly - "music, the unanswered question". Here we find the 26 years old Daria Kameneva from Moscow, who gets ready to conquer the stages of the world. In her biography a certain Stanislav Igolinsky is mentioned as her mentor at Tchaikovsky Conservatory Moscow - who is a good example for this matter. I got sight of the young Igolinsky in the 70ies; he appeared to be a self-willed, even extravagant musician. I heard him with the B flat major concerto by Brahms. The jurors at the Reine Elisabeth Competition in Brussels put him on second place - which was for many, no: for the majority of the public in the final week a disappointing result.

Some years later and only once I had an opportunity to hear Igolinsky live. He disappeared from the international circuit. Whatever reasons or personal circumstances led in his case to the absence at least on stages in middle Europe: the retreat to work as a pedagogue and coherent social security are typical for many flashlike careers, for rocket starts and more or less hard landing in professional circumstances which were not the initial goal.

I dare to predict good prospects for the future of Daria Kameneva. Her playing of Brahms, her sensivity and shaping of forms prove her to be an intelligent musician, who has as base a solid technical substance, which easily enables her to work out colours and figurative ideas. Brahms' sonata No.2 in f-sharp minor is known to be a somehow bulky work, which in its dynamic built, even more in its expressive breaks and layers is physically not really easy to cope with. However, who is like Kameneva capable of mastering the upward storming series of octaves, the encapsulated combination of trills - by the way, there are similarities to Chopin's Polonaise f-sharp minor! - and who is aptly playing the Andante between its tenderness and austerity, him we can in good conscience give green light for future projects.

In the e minor Intermezzo op.119 No.2 it becomes clear, how tenderly and caressing Kameneva can treat the instrument. Here and in the other temperate miniatures of her program she shows this unique sound, which to my taste is typical for Brahms' music and gives it its unique flair and atmosphere. She is also sucessfully interlinking moments of, say, indirect illumination with passages of taut and rhythmic accentuation. Equally convicingly is she playing with controlled power the final Rhapsody op.119 No.4 and the something strict episodes of the D major Variations op.21. What regards the f sharp minor Sonata in general: the dinamically almost abundant and incredible virtuoso playing of Julius Katchen on DECCA is still my reference recording. In an imaginary ranking Kameneva's interpretation seems to be closer to the more clinical variant of Krystian Zymerman on DG.

"...The talented pianist shows remarkable qualities of a musician and artist. Her performance combines scale and subtlety, meaningfulness and passion..."

Honoured Artist of Russia, professor of Tchaikovsky Conservatory in Moscow

"... Strong fingers carved out the lines of the Fantasy (Bach, Chromatic Fantasy and Fugue d minor BWV 903). Very good fugue, meticulously organized, powerful and convincing. She is a pianist of unusual temperament... Indisputably outstanding performance, I'd like to hear her again... Outstanding pianist and pianism!"

"... She convinced me in all her performances with great professionalism and deep musical insight ..."

"... I dare to predict good prospects for the future of Daria Kameneva. Her playing of Brahms, her sensivity and shaping of forms prove her to be an intelligent musician, who has as base a solid technical substance, which easily enables her to work out colours and figurative ideas..Here and in the other temperate miniatures of her program she shows this unique sound, which to my taste is typical for Brahms' music and gives it its unique flair and atmosphere ..."

"Daria Kameneva, a prizewinner of international piano competitions, is a talented pianist with her serious and dedicated attitude to music. She has excellent virtuoso abilities, temperament and artistry.."

People's Artist of Russia, professor of Tchaikovsky Conservatory in Moscow